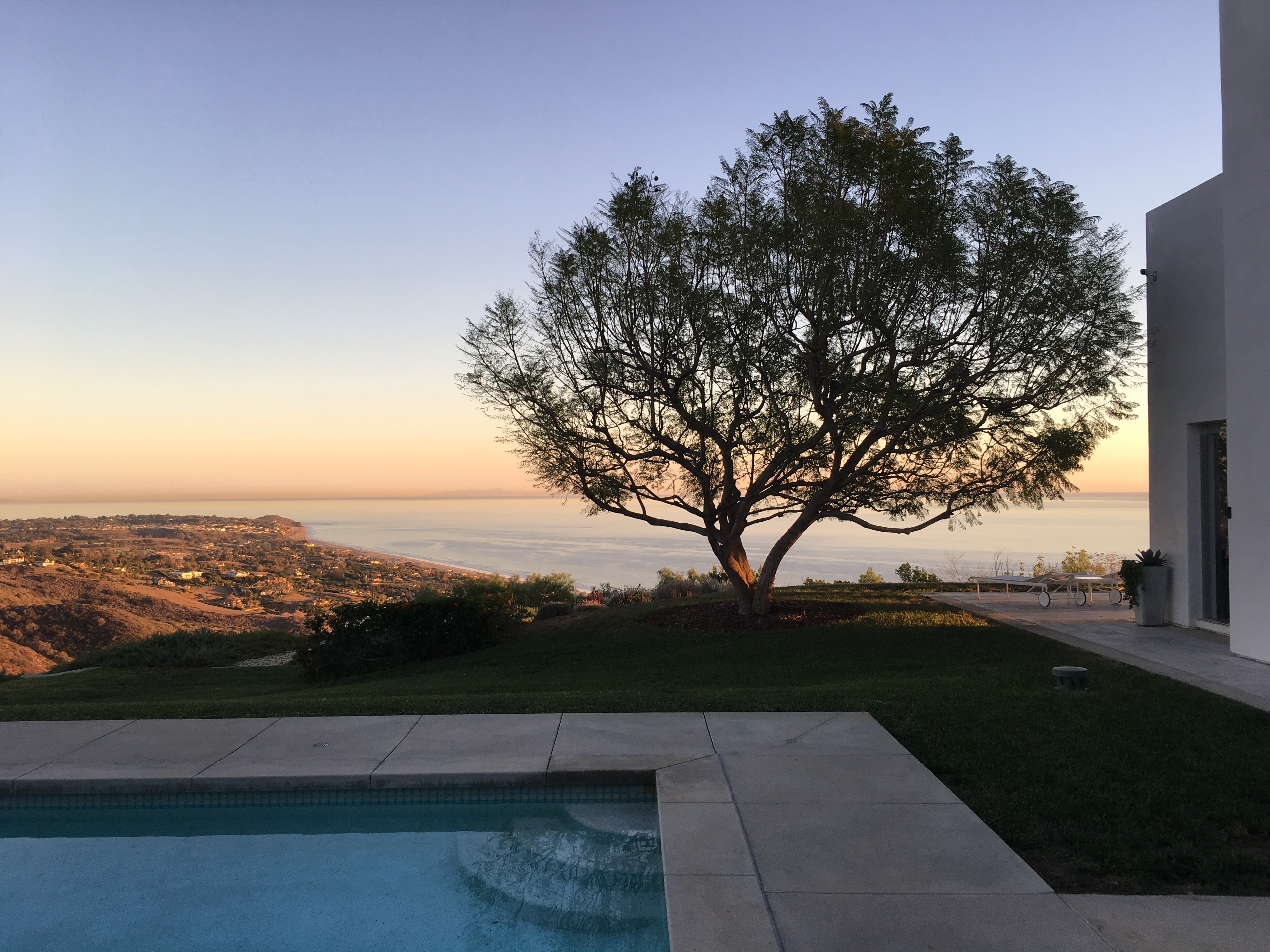 This November marks the second anniversary of the devastating Woolsey fire that destroyed many homes, including ours, in Southern California, so it seemed like the right time to highlight Lorcan O’Herlihy (LOHA), an architect  based out of Detroit and Los Angeles and with whom we have a personal relationship.

Lorcan was fresh out of architecture school when he was working for a firm in New York City and trying to find his way in the architectural world. Meanwhile, his parents had purchased a piece of property up in the Santa Monica, CA mountains that had exceptional mountain and ocean views. Lorcan was hired by his parents to create a modest, minimal, Spanish-inspired home that related to this unique site. This simple piece of architecture ended up being highlighted in Architectural Record in 1986, and it became the house that launched Lorcan O’Herlihy Architects (LOHA). Lorcan promptly moved back to California and set up shop.

Lorcan’s father sadly passed away and the property was sold a few times and renovated into various versions of this lovely, simple box structure with high ceilings, perched on the side of the mountain. On a whim, after enjoying everything about our visits to California, we began looking for a property to buy. We purchased the property O’Herlihy designed for his parents in 2010, and renovated the house to suit our style, opening the home to the amazing views and adding sliding glass doors, refreshing the landscaping and adding an outdoor seating area and some indigenous plantings. To us, it was pretty much perfect, still maintaining the simple original architecture while further incorporating the views into the interiors. 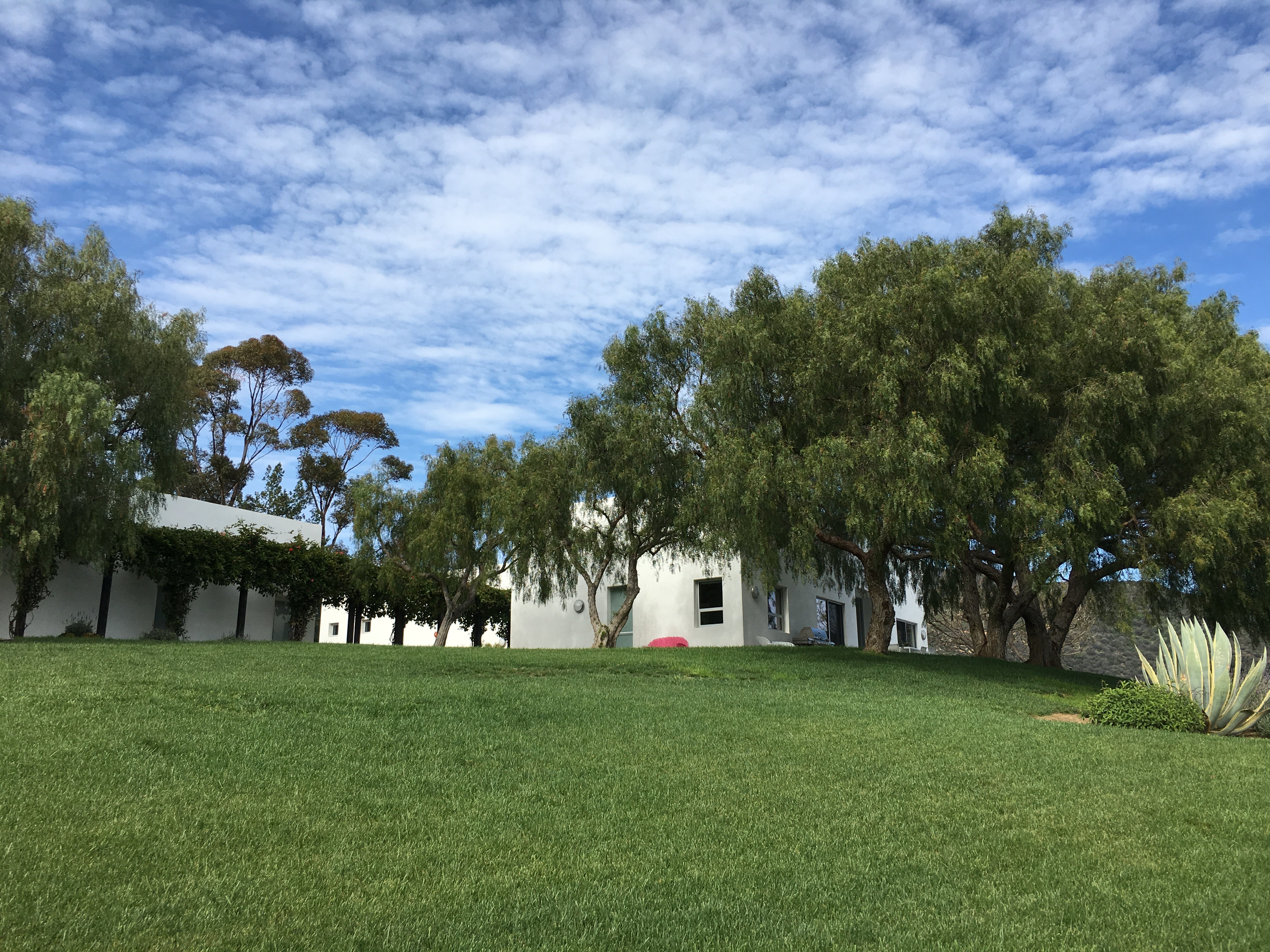 The Woolsey fires hit in November 2018, as we happened to be there visiting, and we followed all protocols and evacuated assuming there was fire support. Unfortunately, there was no way the firefighters could fight the fire as it was a 14-mile long, 40-foot wall of flames moving the equivalent of one football field a minute. Many of the local firefighters were in Northern California fighting other blazes in that area. We received an early morning call to evacuate and off we went, grabbing a small suitcase each and that was about it. In the moment our thoughts were on fleeing to safety first and foremost.  We were fortunate to be able to settle into a hotel and at 11pm that night we were called and told that our home was a total loss.  Obviously there was the initial stage of shock, despair and grief but also relief that we were all safe and well. We can replace things but we can’t replace people. We quickly realized that the only road to recovery was re-birth. Knowing the history of the home, including the name of the architect that designed the home originally for his parents in 1985, made it an easy decision to select LOHA to design our new home.  It just organically felt like the right thing to do. So far we have no regrets and the project is moving ahead using board form concrete instead of wood frame stucco with the hope of avoiding any structure loss from future fires. The new design also encompasses passive design that uses elements of the home to provide warmth in winter and keep it cool in summer. There will be an expanse of windows to capture the beautiful views, but they will have a higher R rating to provide greater fire protection and insulation. 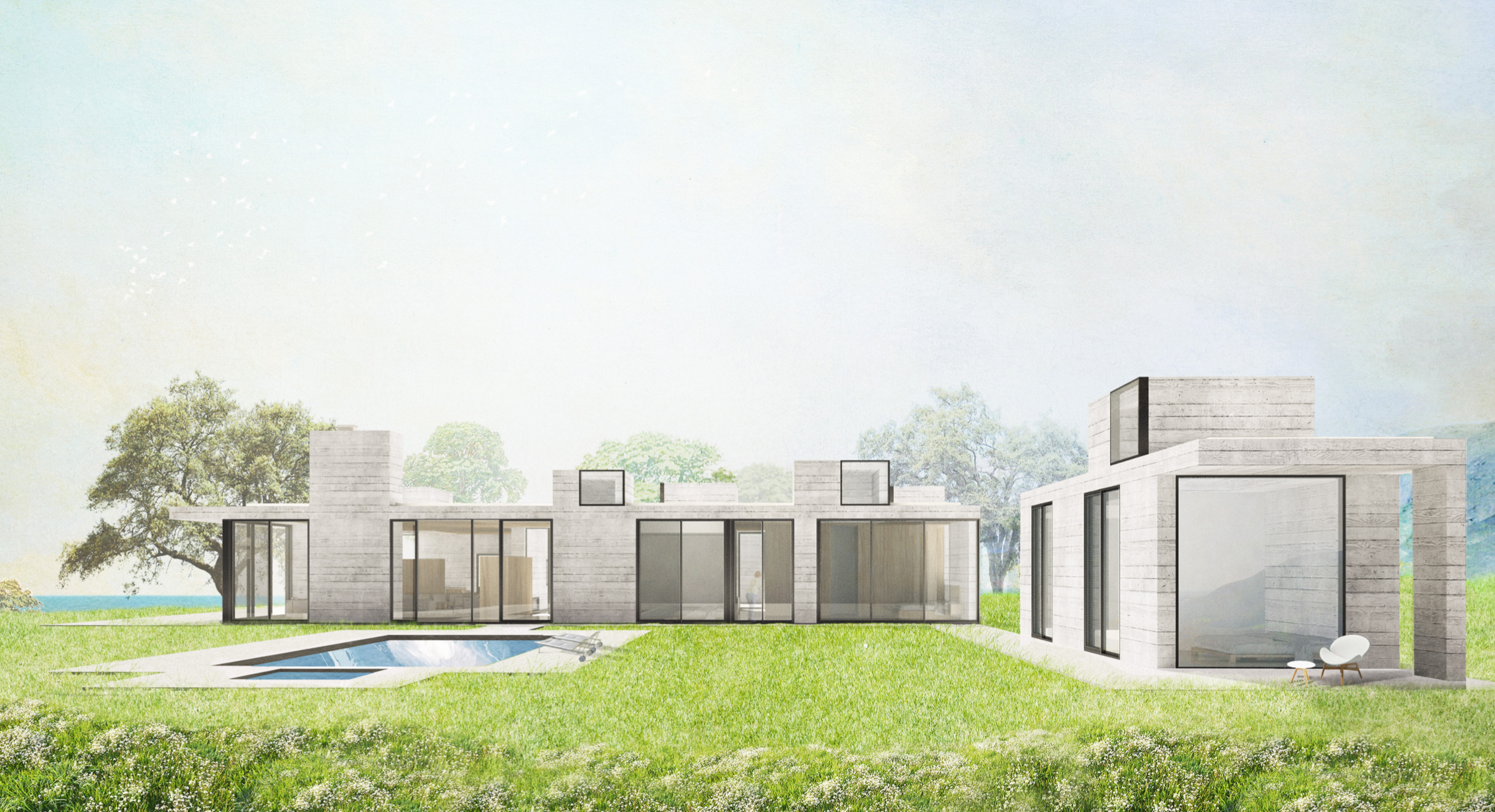 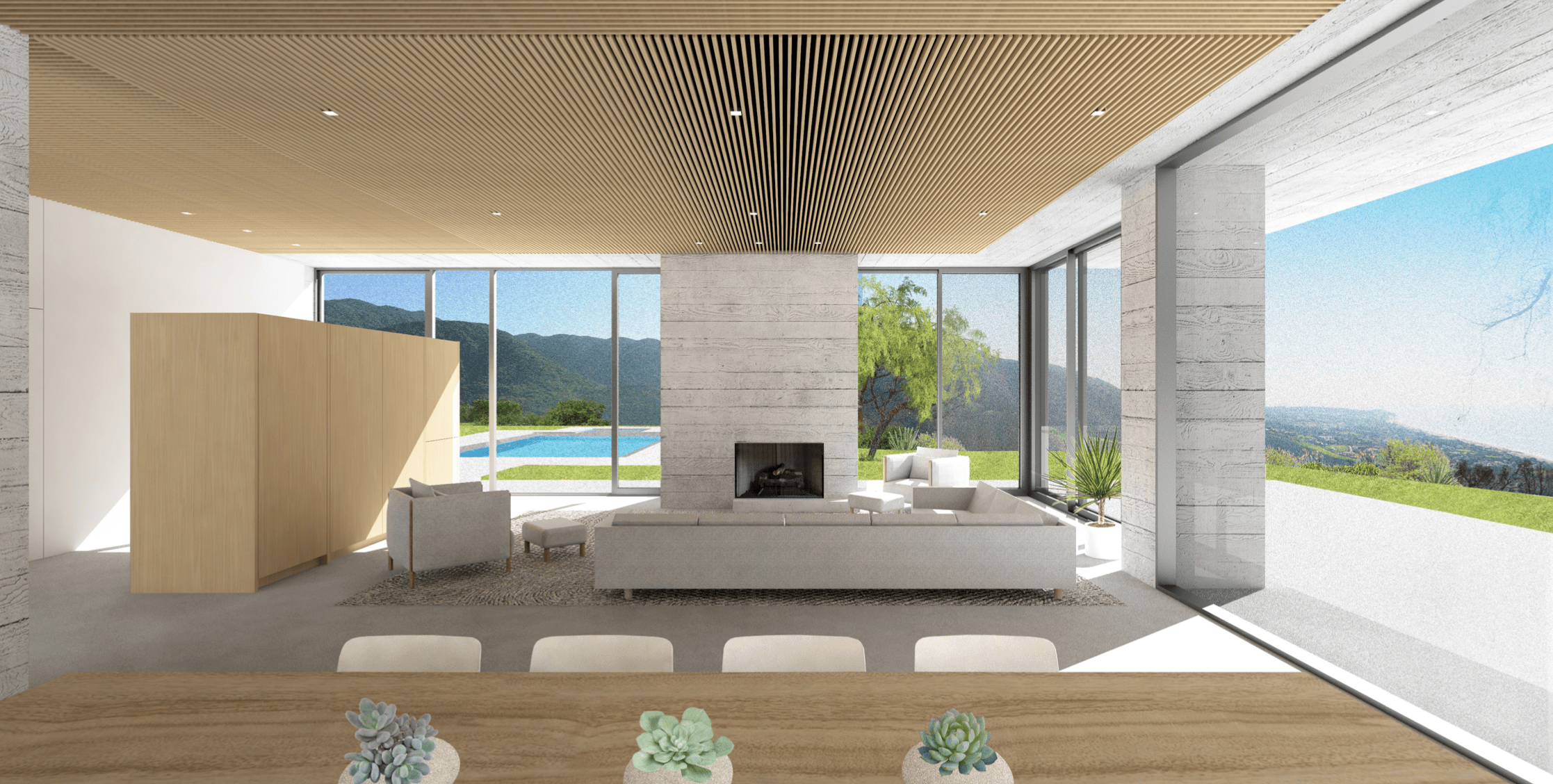 We were aware LOHA was an innovative architecture firm and through visiting their offices in downtown LA and following them on social media, we learned what significant work  they are doing for social housing around the world, which is what I really want to highlight in this blog post. I’ve often worried during our design process we were taking the team away from some of these amazing initiatives they are concurrently working on.

“Good architecture is no longer about simply designing buildings as isolated objects, but about meeting head on the forces that are shaping our world.” Lorcan O’Herlihy Architects [LOHA] believes that architecture is a social act, a tool for engaging in economics, politics, aesthetics, and smart growth to promote social equity and cultural evolution. As cities grow at an unprecedented pace and people are living closer together, it is more important than ever to design sustainable spaces that encourage human interaction.

Our work derives from, and speaks to, a site’s history and culture, and is more importantly for the people who are living there. We begin each project with the facts on the ground, working from the bottom up, not the top down. Our vision is to create places where people want to live and work, where they can attach to the roots that are there, and plant some of their own. You might say we are engaged in the aesthetics of living.” 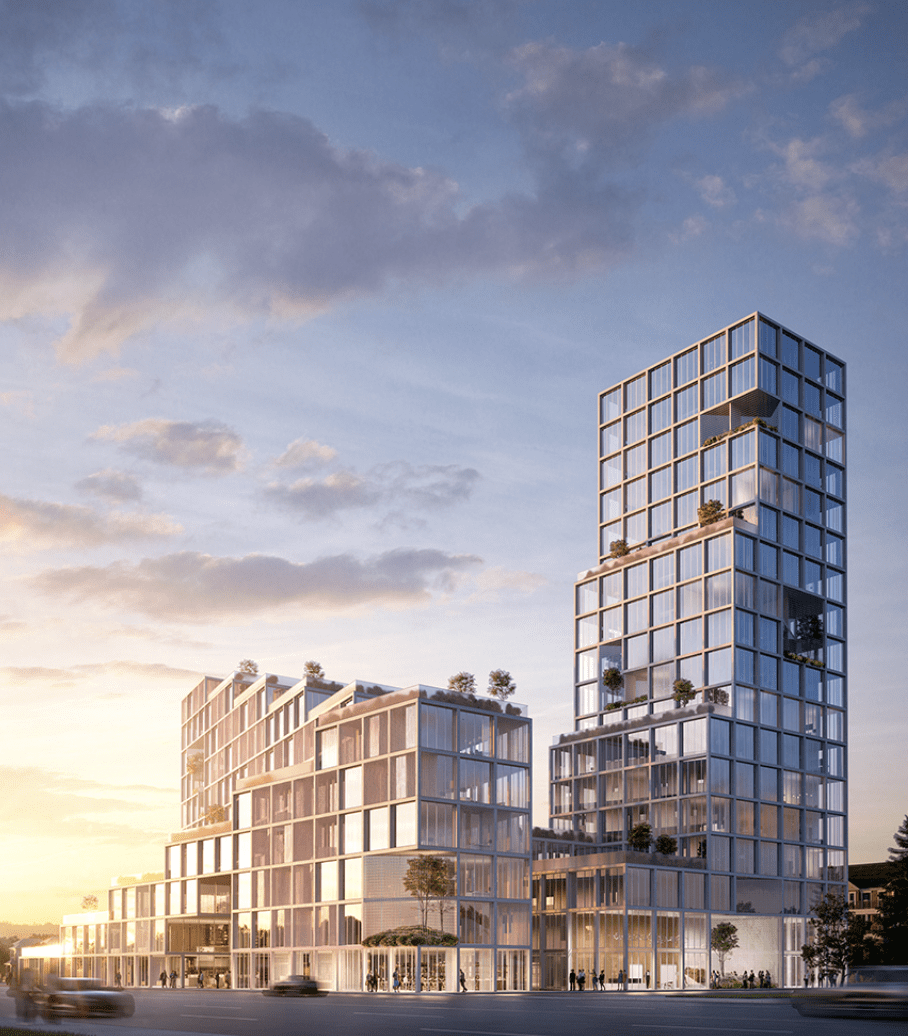 My first LOHA project to highlight is actually “blue-sky work” they did in the GTA. St. Clair 3100  is a “creatively reimagined mid-rise design solution for one of Toronto’s up and coming suburban neighbourhoods.” This mixed-use, multi-unit housing project was developed in collaboration with Toronto’s Globe and Mail, as part of an investigation into unconventional ideas that can creatively reshape the landscape of the City. LOHA’s proposed project is in Toronto’s Scarborough area and incorporates “porosity and connectivity at multiple scales—stepping up and down to the existing neighbourhood and responding to the considerations of the established neighbourhood condition.” 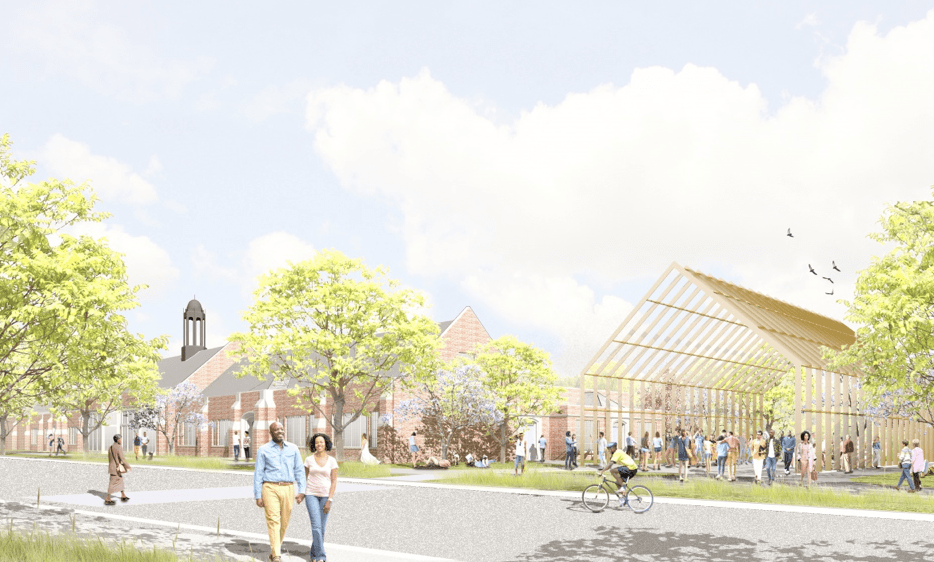 My second project to highlight is work LOHA did in Detroit, Michigan. There, LOHA collaborated with the City of Detroit in a neighbourhood study for underprivileged communities, providing ideas for improving the streetscape and enhancing cultural preservation and public open space. They also included green storm water infrastructure, land strategies and ideas for economic revitalization. 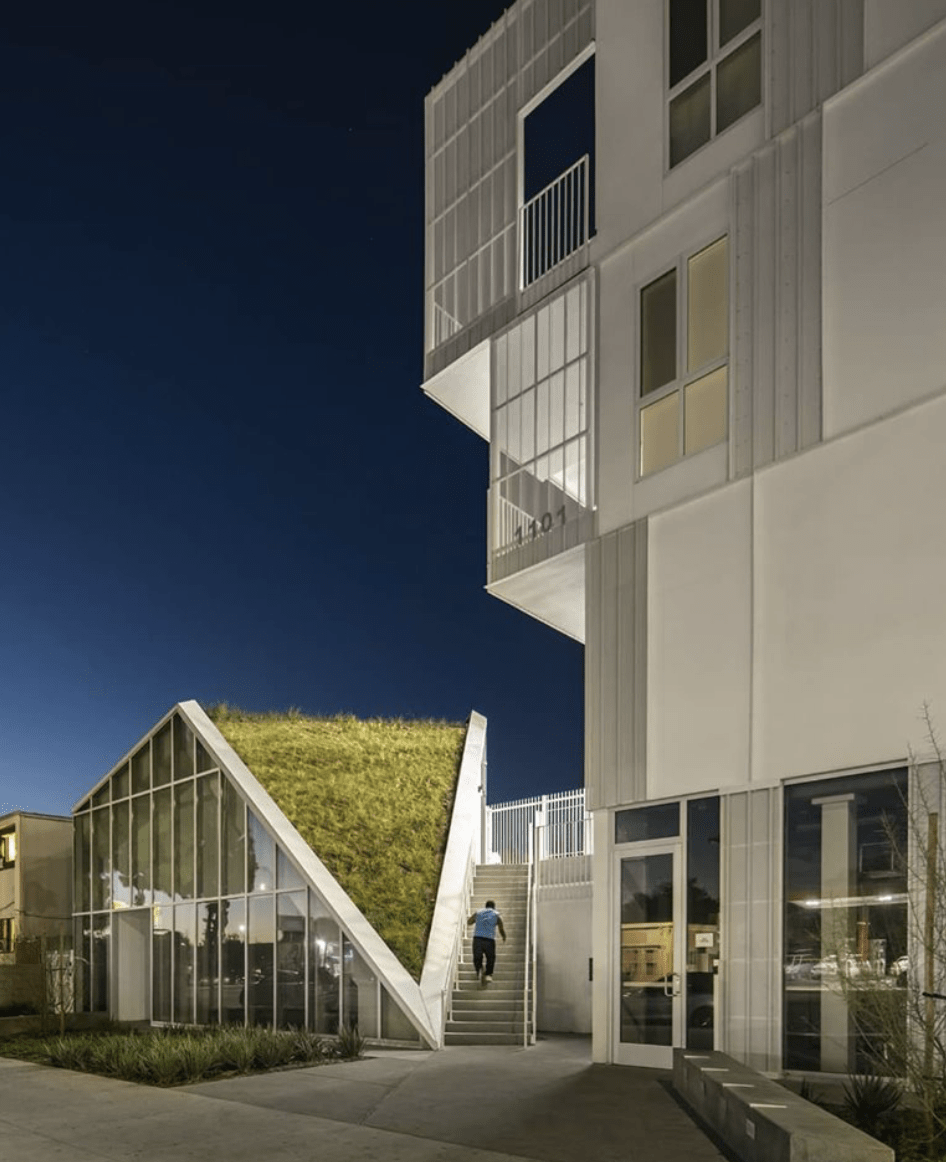 LOHA has also done work in LA creating social housing. The next LOHA project I want to highlight is one for which they teamed up with Clifford Beers Housing to respond to an urgent need for social housing. The MLK1101 project created homes for veterans, the homeless and low income households. Together they transformed a vacant lot in South LA into an affordable community of 26 units. Further details can be found in this link MLK 110 Supportive Housing 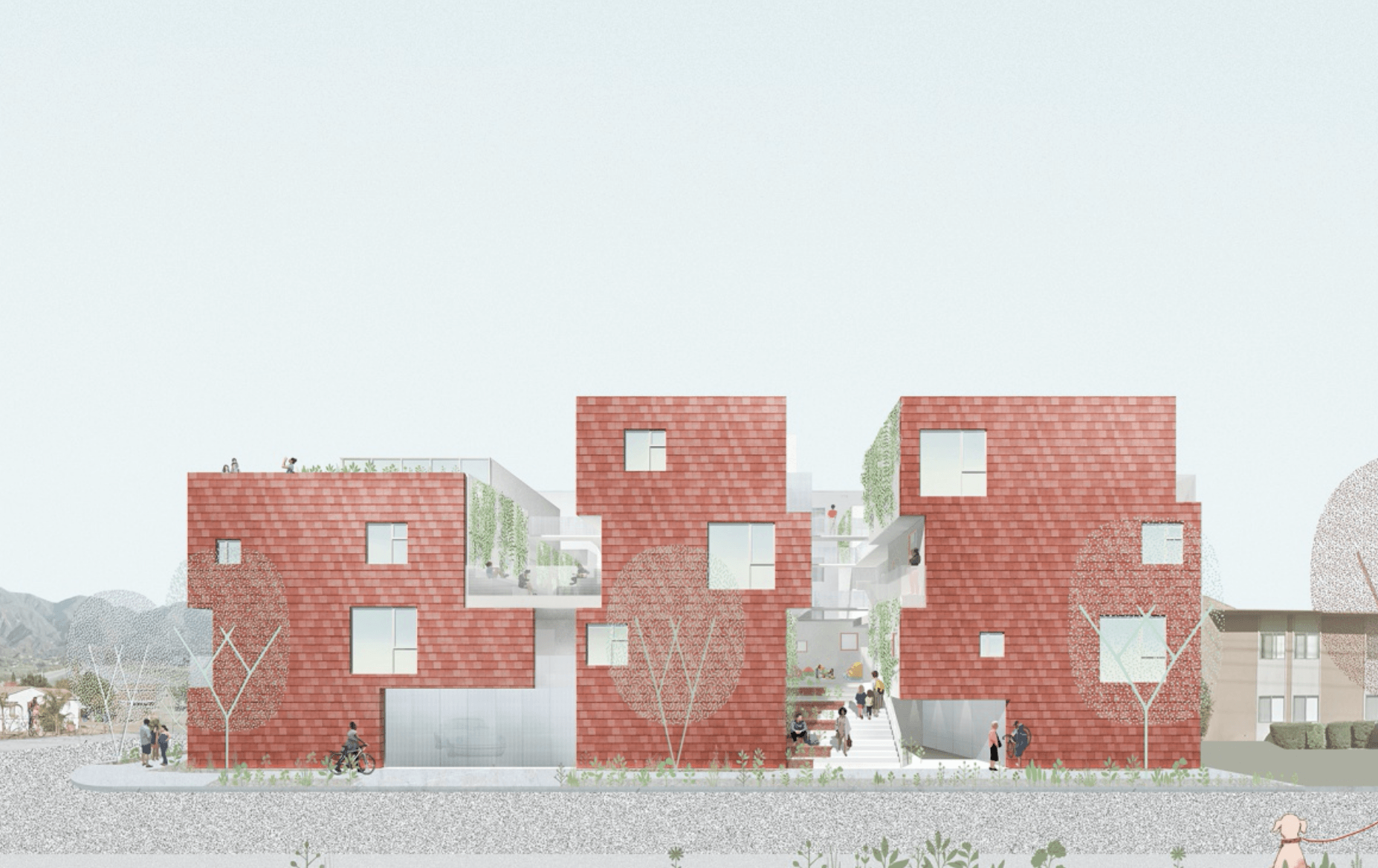 Just outside Los Angeles, in the Sun Valley area of the San Fernando Valley, they have worked on another social housing project known as  Sun King Supportive Housing. Each project exhibits Lorcan’s belief that artistry and social connectivity are key to building vibrant spaces that elevate the human condition. 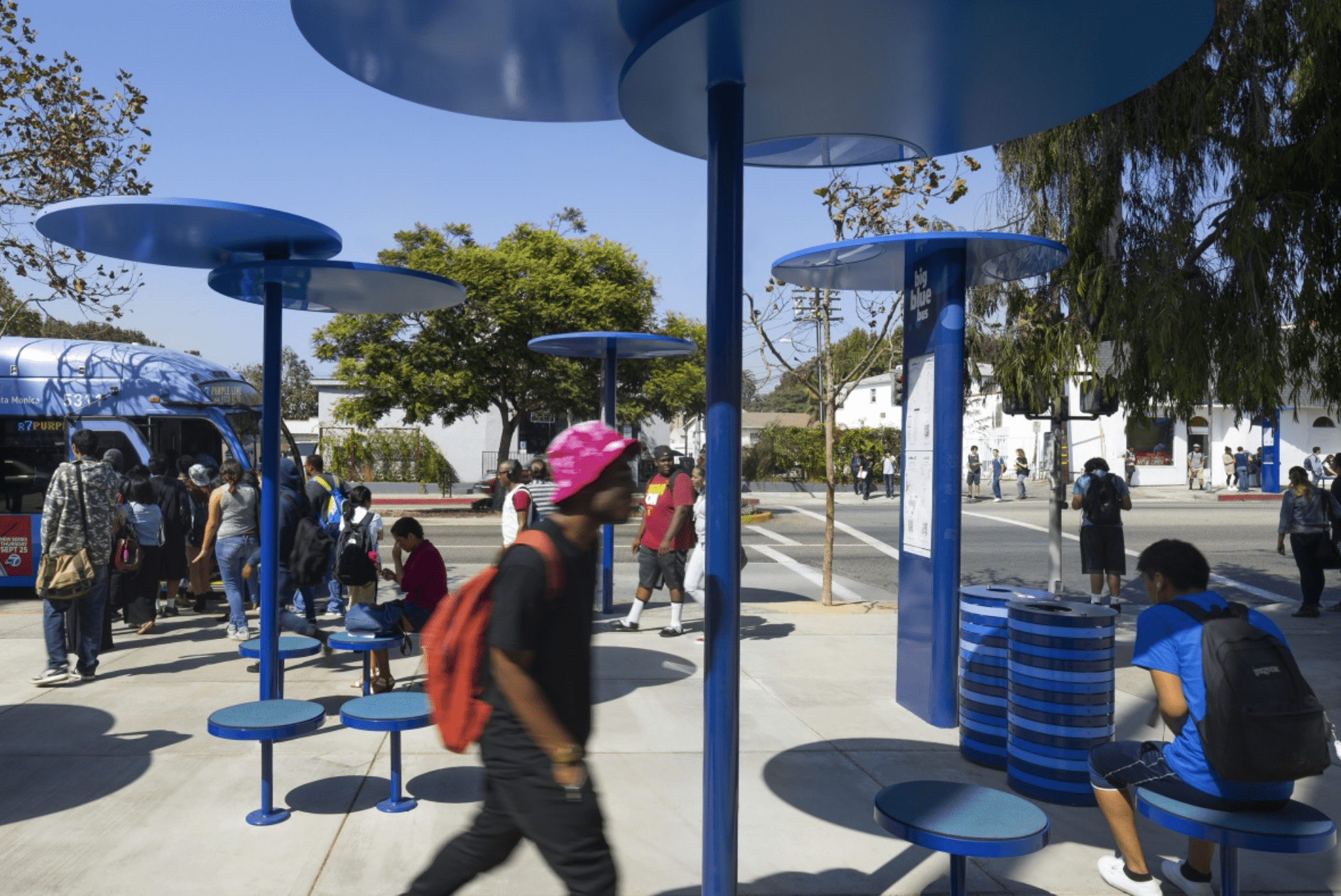 Those of you who have been to Santa Monica might have seen the Big Blue bus stops. LOHA worked with Bruce Mau Design to create clever waiting areas for individual shelters, taking each site into consideration with a highly flexible, modular system of components that can be adjusted for each of the 300 bus stops as well as for customization of future stops. 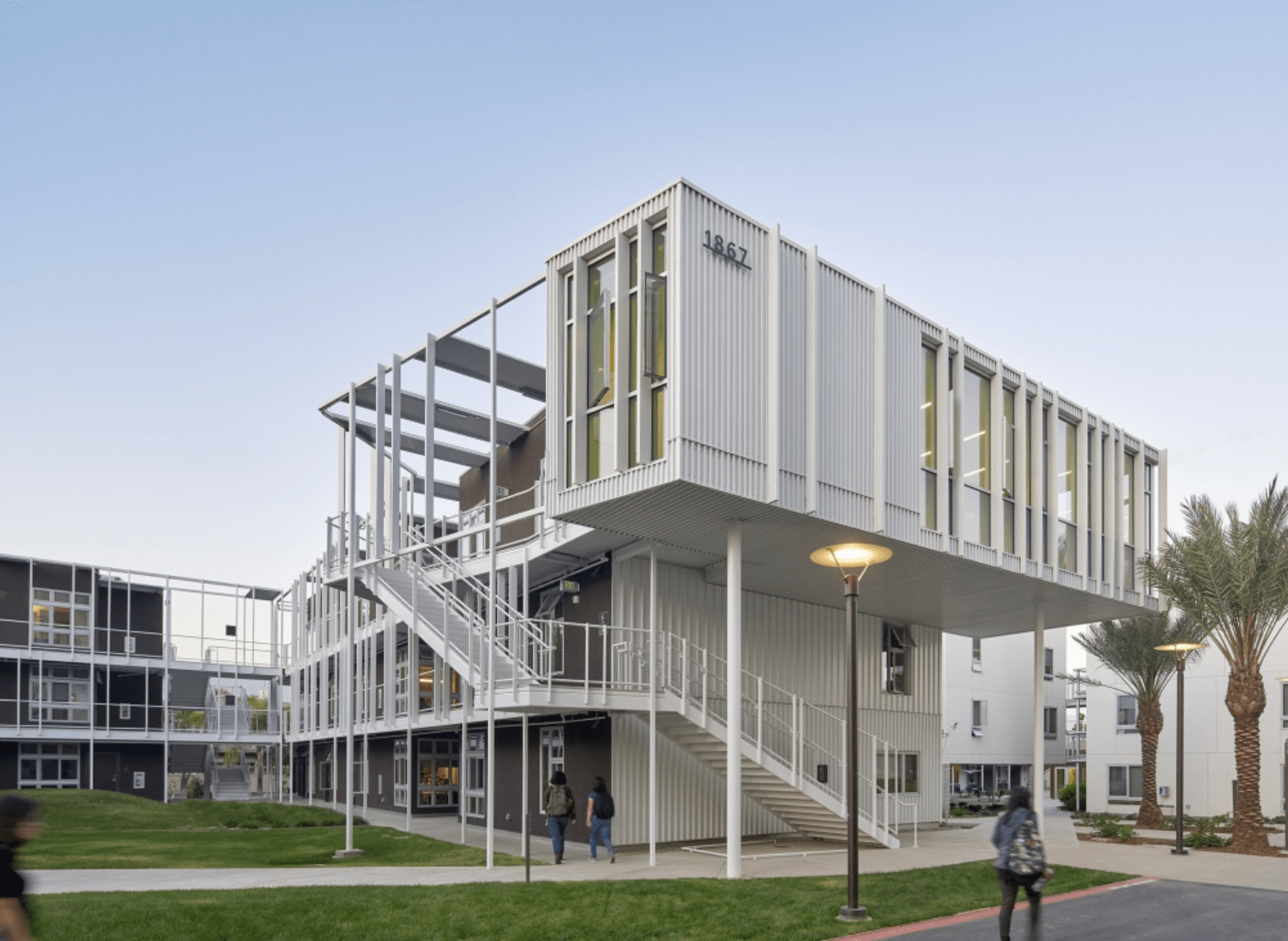 LOHA has designed a LEED Platinum plan for seven student housing structures as part of the San Joaquin Housing complex at the northern limit of the University of California, Santa Barbara. 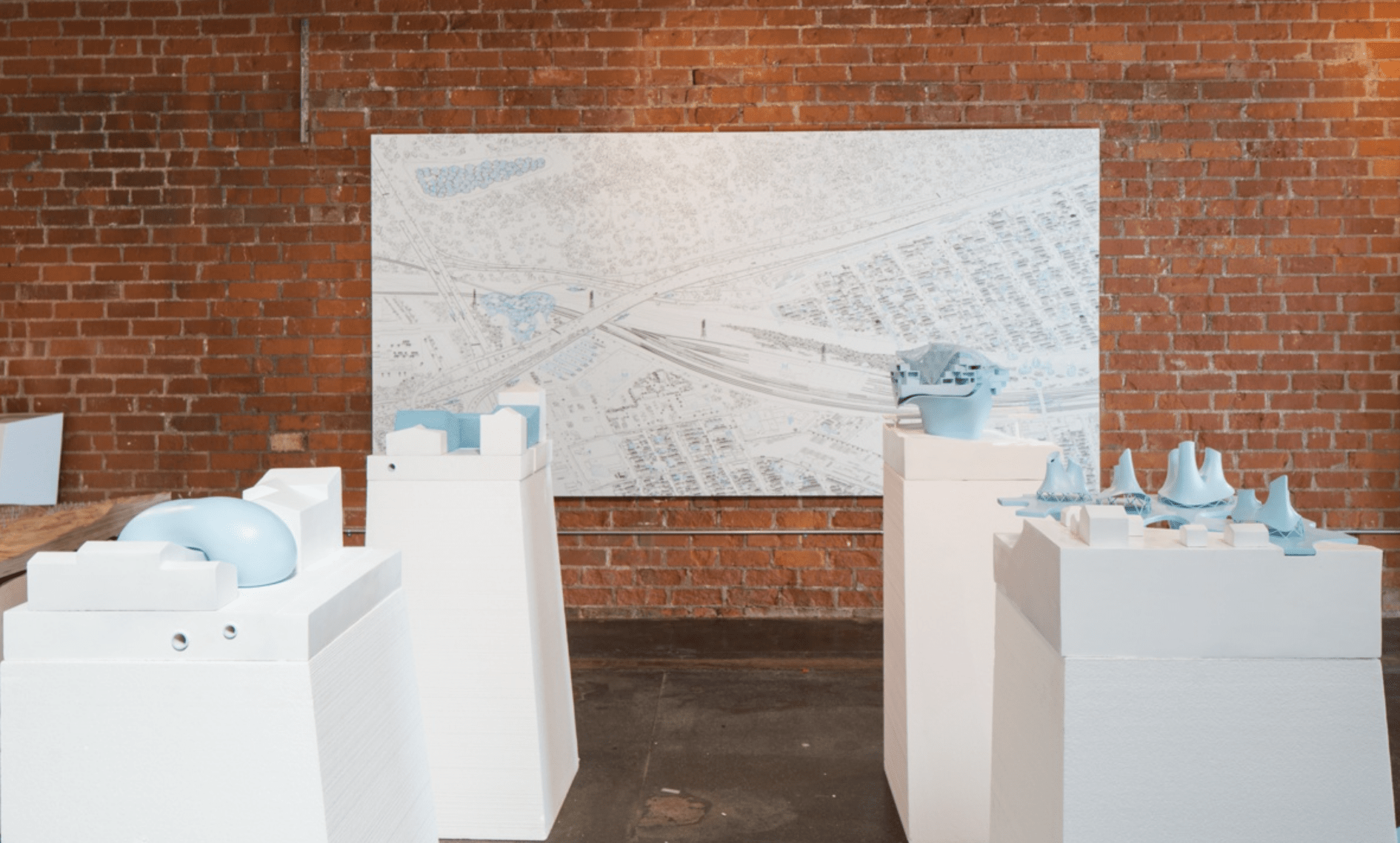 One of the LOHA projects I find most fascinating is the Watershed Project which addressed the issue of climate change and lower rain volumes in California.  “According to current climate change projections by the United Nations, almost half the world’s population will be living in areas of high water stress by 2030.”

California has suffered years of drought conditions and there is currently no comprehensive plan to take action towards water preservation and management. The Watershed Project comes up with viable options for water managment. “LOHA designed a system of interventions at multiple scales, combining living, public space and water-based infrastructure into a new hybrid patchwork that will capture, recycle, purify, loop, and reconnect ground and stormwater back to the water table and the Los Angeles River.”

Lorcan’s Irish heritage brought him to design this home that is a blend of old world Dublin and a contemporary addition. The Flynn Mews House is the perfect juxtaposition between old and new.

These are just a few highlights of the great designs coming from LOHA and I am sure there are many more to come. We look forward to our project being completed in 2022 to enjoy our special site that will be an improved version of the original LOHA design. 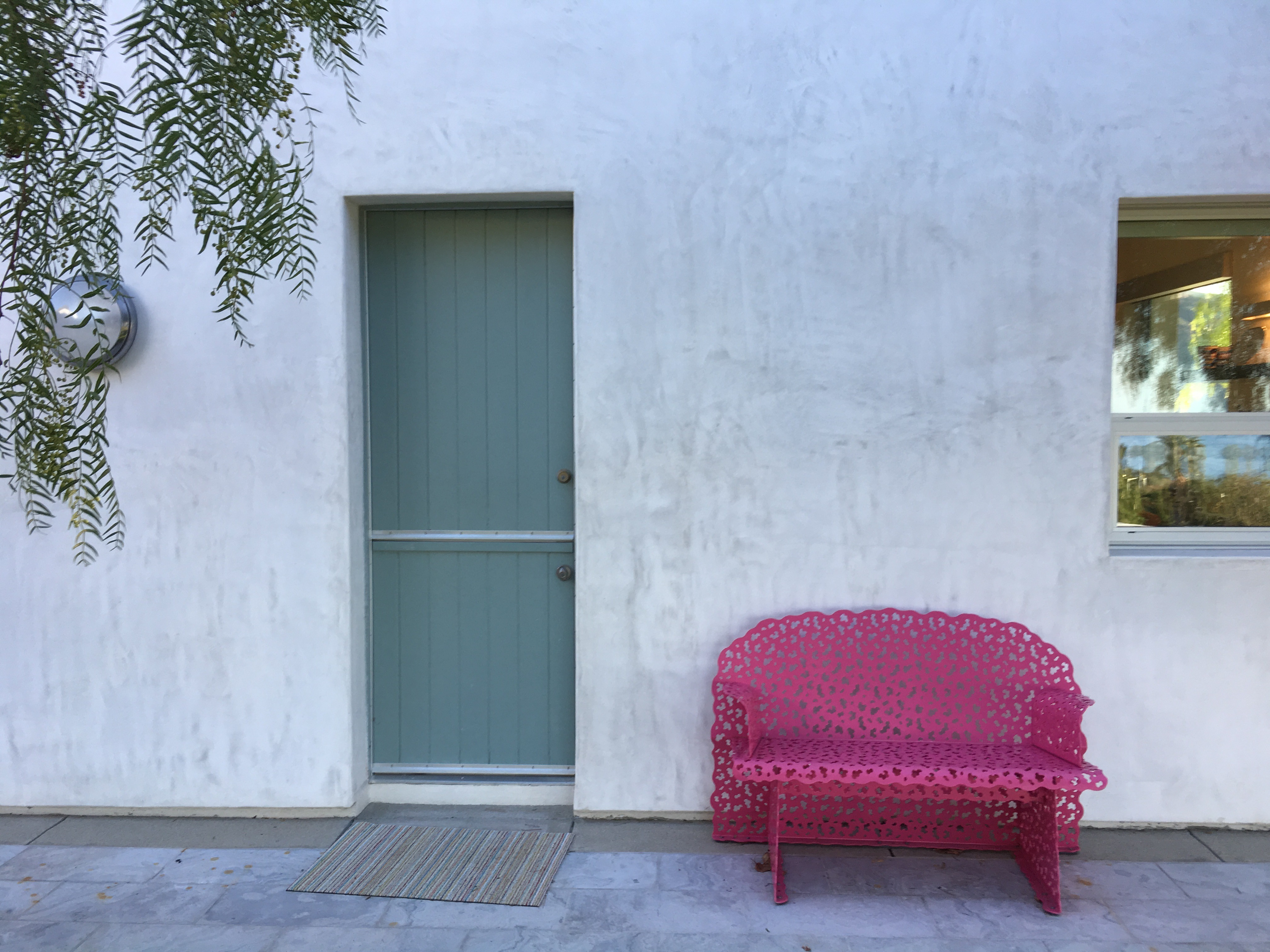 “Thank you so much for the professionalism, business sense and sensitivity you brought to our real estate transaction. Both of us felt that we absolutely made the right choice in working with you. You are the most client focused agent we have ever attempted to work with–you listen, you follow through and you deliver. Your reputation around this household is…incredibly thorough–every detail beyond expectation. Thank you again and until our next project!”
– Jim and Kaitlin Eckler